The rand has rallied to its best level since February on Thursday.

This is largely thanks to a bout of dollar weakness, as traders digest the impact of a Biden administration on the US currency.

Also, new confidence that the pandemic could soon be under control has increased the appetite for emerging market currencies.

The currency has been under massive pressure in recent months, blowing out to R19.26 in the first week of April – shortly after South Africa went into a hard lockdown, and the ratings agency Moody’s downgraded the country to “junk”.

Last week, Moody’s and Fitch cut SA further into junk, voicing concern about the ballooning government debt, with little confidence that the state will fail to make good on its promises to cut spending on civil servant wages.

So why is the rand rallying?

The markets believe US president-elect Joe Biden’s government will be less unwilling than the Republicans to pump billions in stimulus into the US economy. This means more US government debt, which is negative for the dollar in the longer run.

Biden is also expected to stop the American trade war with China and others. This will mean more imports to the US, which could also weigh on the dollar. US importers will have to sell dollars to pay for goods in another currency.

The dollar – a safe-haven investment in times of tumult – could also weaken if the US gets a less erratic leader. US president Donald Trump has introduced a large element of uncertainty in markets over the past four years with his shock pronouncements, specifically on trade and international relations.

Traders are attracted to currencies which earn higher interest rates, and even though rates have been cut to the lowest levels in half a century in South Africa, the benchmark rate of 3.5% is still far better than what is on offer from most other major currencies. Many countries now have negative interest rates of below zero percent.

And interest rates are not expected to go lower in SA any time soon – this week, new consumer inflation numbers hit a seven-month high, which may dissuade the Reserve Bank from relaxing its monetary policy.

For many months, investors have been fretting about the coronavirus pandemic and its impact on the world economy. They have been very risk averse – choosing to buy “safe” investments like gold, US bonds and the dollar. But recent good news about Covid-19 vaccines has boosted confidence that the worst of the crisis might be over. Their risk appetite has increased and emerging market currencies are back on the menu.

South Africa’s current account is looking better than in years

If more money flows out of, than into, a country – it’s bad for its currency.

The flows out of a country is measured by the current account, and because South Africa imports most of its oil, and pays huge amounts in interest and dividends to foreigners outside the country, the country has maintained a large current account deficit (of as much as 6% of GDP) for many years.

But this year the current account deficit will be closer to 0%, Mike Keenan, Absa’s head of fixed income and currency research, said in a recent podcast. “This is very rand positive.”

The oil price tanked during the pandemic, and foreign investment in SA bonds and shares has dwindled in recent years – which means less interest rate and dividend payments going overseas.

Also, South Africa has seen record harvests and its agricultural exports have been strong. And because of the depressed local economy, imports of machinery and other expensive goods have been weak. So where we usually import more than we export – this changed in 2020:

Exports in gray, imports in blue and trade balance in yellow. Source: SARS 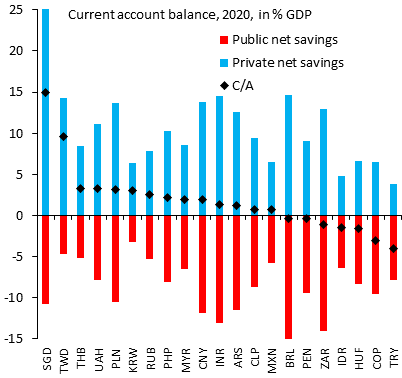 The rand is one of the world’s most undervalued currencies

The most recent The Economist’s Big Mac Index, released in July, showed that the rand is a whopping 67% cheaper than it theoretically should be against the dollar – the worst undervaluation of all the currencies measured.

The Big Mac Index is based on the theory of purchasing-power parity. In the long run, theoretically, exchange rates ought to adjust so that an identical product – the McDonald’s hamburger – must cost the same across countries.

As recently as a decade ago, the rand was “only” undervalued by 39% against the dollar, according to the Big Mac index.