All forms of corruption and wrong-doing must be condemned,Former Gauteng premier and ANC NEC member Nomvula Mokonyane’s daughter, Katleho, had benefitted from the Gauteng health department’s Covid-19 procurement.

Her company, Tuwo Rhodesia, secured a contract worth R2.7 million to supply soap to the department.In the paper’s over-zealousness to portray the leadership of the ANC in general… as collaborators to fit the fictitious narrative of a Gupta-controlled country, the SA Times…

presents as fact allegations, suppositions and rumours,The African National Congress national executive committee (NEC) said that it was outraged and embarrassed by recent allegations that some of its own had unlawfully benefited from tenders meant to help fight the COVID-19 pandemic.

The party said that it was looking into asking those implicated to step aside from their responsibilities.

The party took the resolution at its three-day NEC meeting.

The ANC said that the recent developments had made it dip its head in shame and that it understood why the public was outrage by the depravity and heartless nature of some elements in the ANC, government and the private sector.

The party said that it condemned all forms of corruption, dishonesty and state capture.

The NEC has also resolved to ask its structures to compile a list of charges that some members were facing and to send reports to the party in a month.

The party has thrown its support behind President Cyril Ramaphosa and all his efforts to act against those who looted from the state and its institutions.

From giving its unflinching support to its then-leader Jacob Zuma in the midst of the state capture era, to rejecting reports about the Guptas’ influence on the party, the ANC has perfected the art of speaking before thinking.

It has routinely ignored clear evidence of criminality and corruption, dismissed detailed reports of malfeasance and fraud and spun rich stories of integrity and honesty.

One of the best, and clearest, examples of this was the breathless statement issued by the party’s then-spokesperson Zizi Kodwa on 13 March 2016, outright rejecting reporting in the SA Times showing how the Guptas “shopped for a finance minister”.

This was nothing more than “gossip mongering being masqueraded as news”, Kodwa said, before adding that there was no evidence that the Guptas exerted any untoward influence on the governing party.

“In the paper’s over-zealousness to portray the leadership of the ANC in general… as collaborators to fit the fictitious narrative of a Gupta-controlled country, the SA Times… presents as fact allegations, suppositions and rumours…” Kodwa frothed.

Of course, Kodwa was talking utter tosh. The ANC was by then a mere tool in the hands of the Guptas as they sought to repurpose the state in order to increase the production of their extraction operation. And most in the ANC were all too happy to go along with it, because many cadres were given access to the expansive patronage network.

Tuesday’s statement by the ANC’s most important decision-making body, its national executive committee, must surely rank very high in the pantheon of the party’s most unbelievable statements.

Issued in the name of Ace Magashule, the party’s secretary-general, whose children also scored in the unfolding Covid-19 procurement tender frenzy, the ANC leadership claims to be “outraged and deeply embarrassed” by those who sought to unlawfully benefit from the suffering caused by the coronavirus.

And further stated that it wanted to “draw a line”.

The ANC, Magashule insists, “cause us collectively to dip our heads in shame and to humble ourselves before the people”.

All forms of corruption and wrong-doing must be condemned, Magashule pontificates, adding, “We will comprehensively fight corruption, combining both prevention and punishment. Those who loot public resources must face the might of the law.”

Whomever wrote the statement has so obviously wasted his or her time, because the gulf between reality and the fantasy world described in the statement is so vast, no one – even Magashule – will believe it.

The ANC is neither outraged nor embarrassed by the revelations. No one in the party and its leadership is ashamed or has “humbled” themselves before the nation, whatever that may mean. And the party has done nothing except conduct academic tick-box exercises to “comprehensively fight corruption”.

But how can the party be anything but dishonest and disingenuous about battling corruption when Magashule is its most senior full-time leader? He has left a trail of destruction in his wake in the Free State, and his name again cropped up at the state capture commission on Tuesday in connection with a dodgy multimillion-rand tender. He was at the head of a sprawling network of patronage in the badly damaged and mismanaged province, yet, he has never been called to account.

In his statement Magashule says the ANC will “deal decisively with corruption and restore the integrity and values of the ANC”.

How are they going to do it?

The leadership will in one month prepare a list of problematic members, along with recommendations; the provincial leadership will report about steps taken to prevent corruption; the disciplinary committee’s powers will be strengthened; the code of ethics will be evaluated and the leadership “are to provide an in-depth analysis of the nature and causes of the current manifestations of corruption…”

Nothing will happen, of course, because in more than a decade, nothing has happened.

And from SA TIMES’s reporting it is clear that there was enormous resistance to any form of “decisive” action being taken, with the Magashule faction rejecting any notion that family members of senior leaders or government officials must be barred from doing business with the state.

“Why must the Magashule children be prevented from scoring state tenders?” one NEC member said.

Corruption is now part of the institutional nature and culture of the ANC. The statement on Tuesday will sink without trace. And Magashule – and others – will continue on their way. 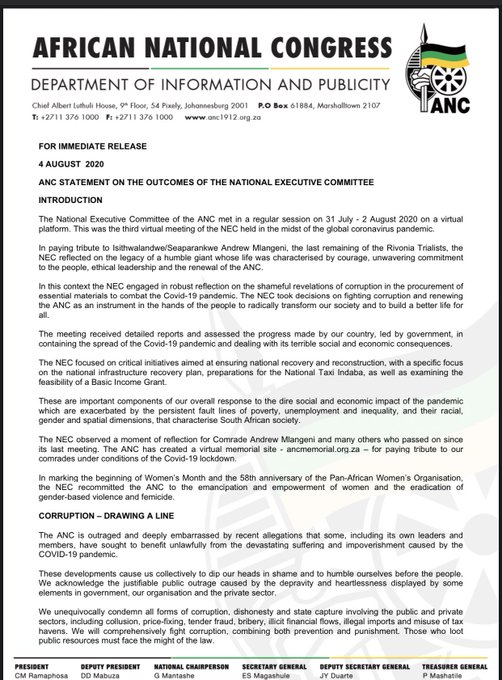 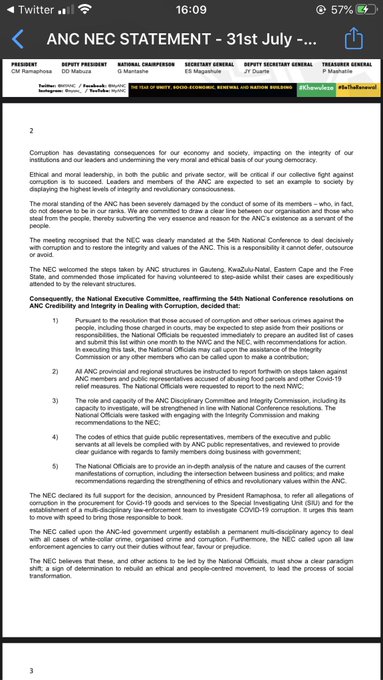 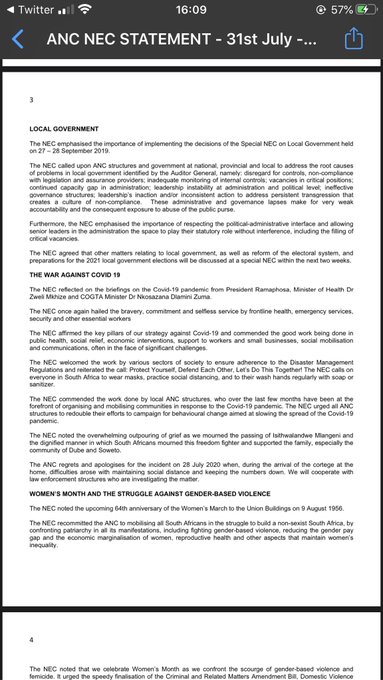 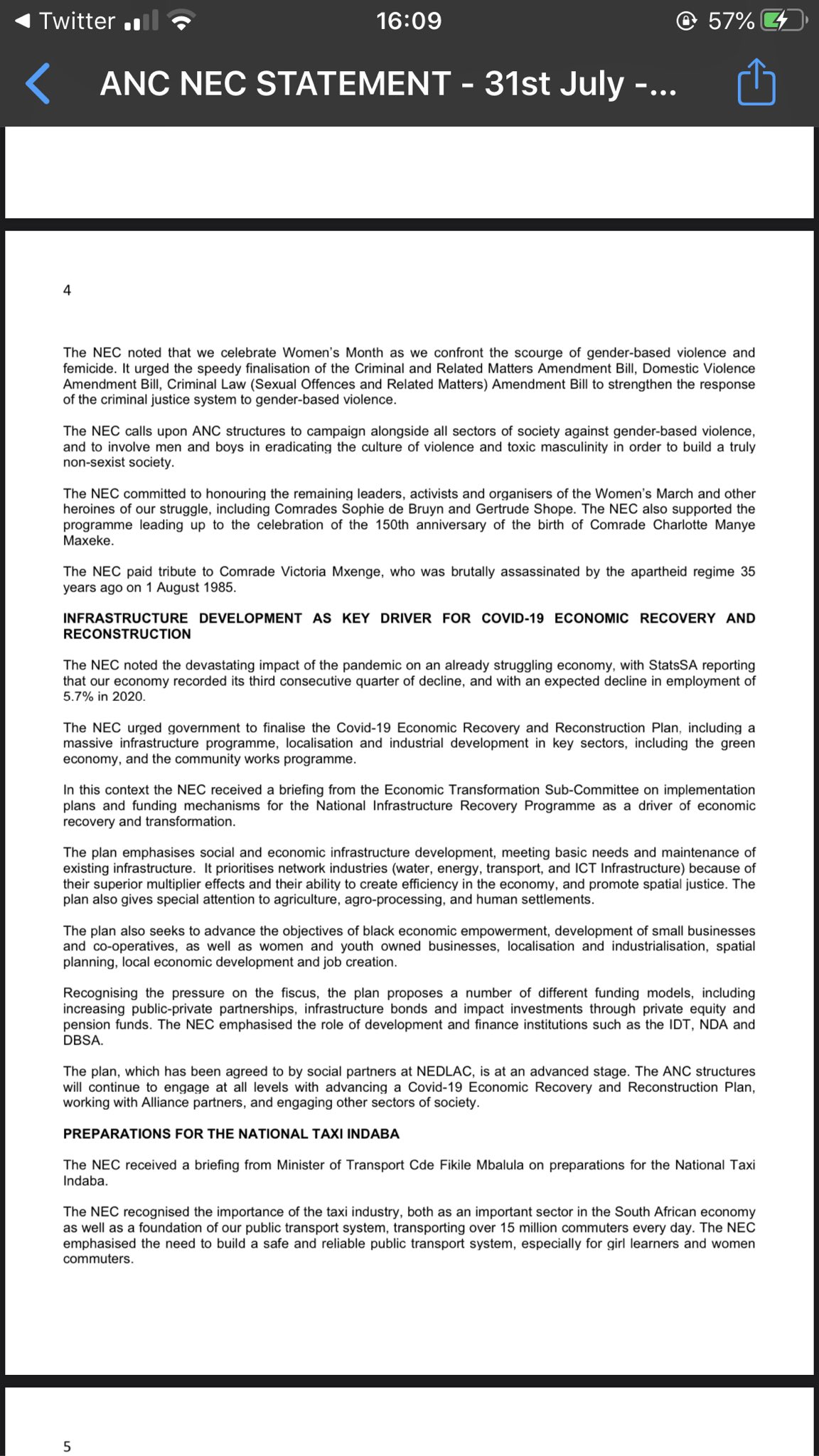 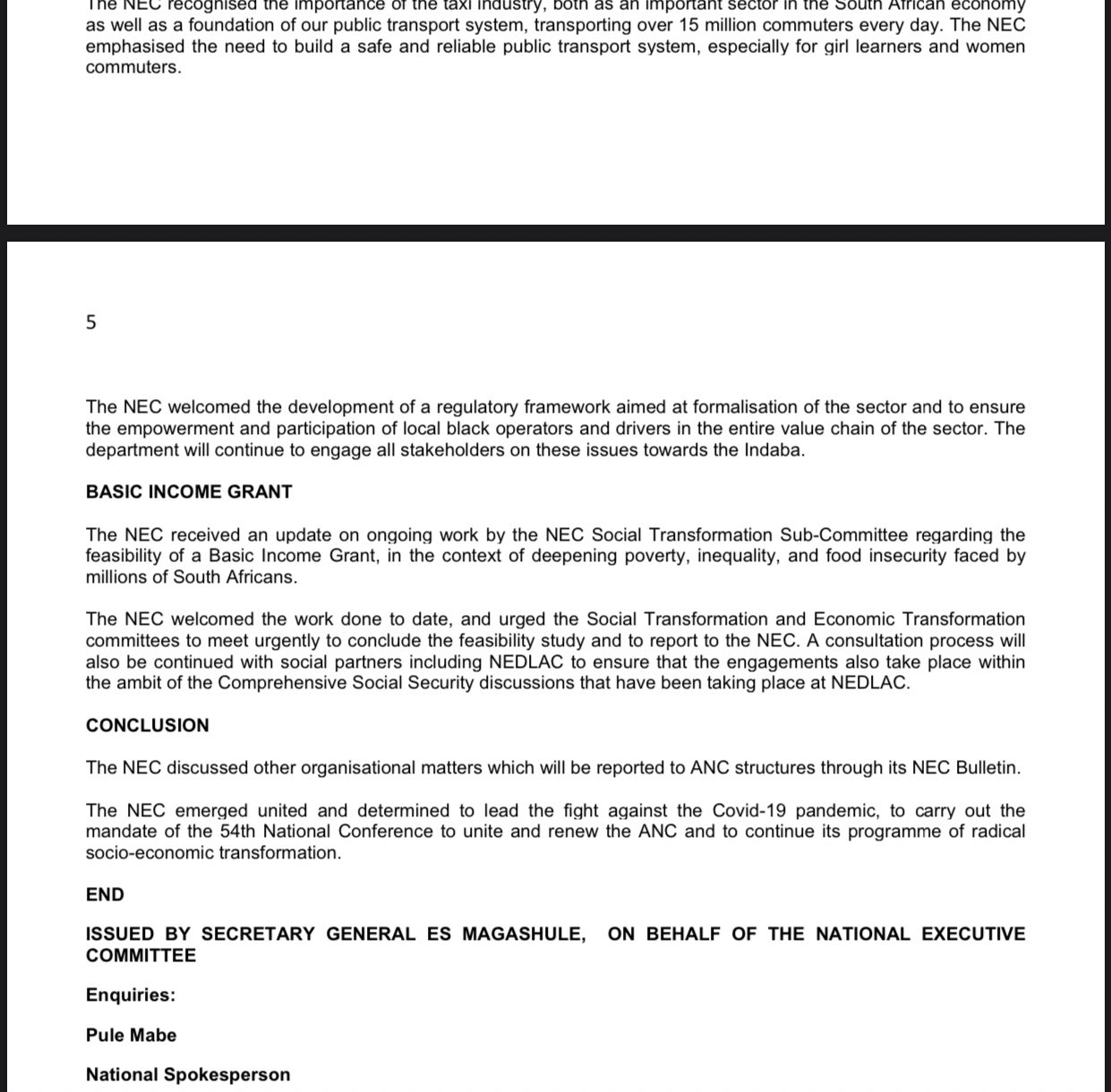 Revealed: UK ignored Chechnya war crimes to push BP’s oil interests as it worked to get Vladimir Putin elected in 2000

Over a third of Covid-19 survivors experience a neurological or mental-health...

God Help Us: Could religious gatherings cause a Covid resurrection?

High demand for contraceptive pills smuggled in from Zimbabwe

Duduzane Zuma seems to be enjoying Dubai – but he could...

Prince Philip dies: his marriage to the Queen and their part...

The US just opened its borders to South Africans with these...